The Department of Cultural Affairs and Special Events (DCASE) is pleased to announce expanded programming happening this fall at the historic Maxwell Street Market located at 800 S. Desplaines St. as part of the Chicago City Markets presented by Humana. The free events celebrate arts and culture at the market including a Family Day, featuring free family activities and portraits on September 15, a celebration of Sukkot, the Jewish holiday celebrating the fall harvest season, on October 6 and Día de Los Muertos, the Mexican tradition of remembering ancestors, on November 3.

Family Day
Sunday, September 15
10 a.m.–2 p.m.
Stop by Maxwell Street Market for an action-packed day for the whole family. Dance, create and strike a pose, then don’t forget to eat and shop!

Take home a special print from a free family photo session with Chicago-based artists Yvette Mayorga and William Estrada, who created a unique backdrop using a collage of items treasured and sold in the market. This commission is part of MAS+ ART at Maxwell, a creative placemaking initiative led by Paola Aguirre Serrano of Borderless Studio LLC. 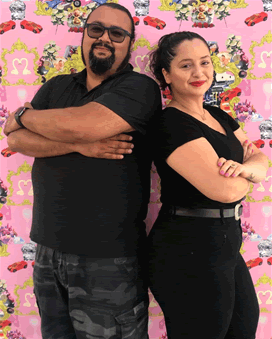 The Wonder Wagon, a mobile performance platform made from a converted trailer, brings puppets to the market, connecting communities through collective imagination and wonder. Conceived and created by Will Bishop and Grace Needlman. For more information on The Wonder Wagon, visit wonderwagon.org. Participation supported in part by 2nd Floor Rear.

Rayo is the founder of Centavrvs, a band based in electronic and avant-garde music where folklore and Mexican popular culture merges with different rhythms such as cumbia, afrobeat, salsa, tribal, Brazilian and world music. Centavrvs' “electronica regional Mexicana” sound will be featured during World Music Festival Chicago on Saturday, September 14, at Millennium Park. Rayo's DJ set explores the diversity of the rhythms around the world, creating an eclectic and festive atmosphere.

The Education Department and Yollocalli Arts Reach of the National Museum of Mexican Art host biweekly art activities at the Maxwell Street Market. The day’s project will be two-dimensional paper piñatas.

Jewish New Year and Sukkot Celebration at Maxwell Street Market
Sunday, October 6
10 a.m.–2 p.m.
Join us in anticipation of Sukkot, the Jewish holiday celebrating the fall harvest season, where friends and strangers gather to commune over a shared meal and experience. This holiday reflects the legacy of Maxwell Street Market, started by newly arrived Jewish residents from Eastern Europe and where generations of immigrants have found community in Chicago.

Learn to make a lulav, one of Sukkot’s most important symbolic objects, with artist Leslie Baum, who will guide you using handmade objects as well as items you can purchase at the market. Organized by Couldbearchitecture, a Chicago-based design practice directed by Joseph Altshuler and Zack Morrison.

A quintet from the legendary Maxwell Street Klezmer Band will entertain with their authentic yet fun musical stylings.  Audiences of all backgrounds have been delighted by Maxwell Street's high-energy performances that glow with warmth and humor. They are the Midwest's most popular klezmer band, touring seven times in Europe and performing throughout the U.S., including Carnegie Hall.

Día de Los Muertos
Sunday, November 3
10 a.m.–2 p.m.
The FREE event will celebrate the Day of the Dead, the Mexican tradition of remembering ancestors during “All Soul’s Day,” with live performances, workshops and more. A full schedule will be posted at a later date at maxwellstreetmarket.us.

For over a century, the historic Maxwell Street Market has been offering an eclectic mix of foods and finds—including fresh produce, furniture, clothing, tools, garden plants, collectibles and rare items. The market is also renowned for the best, authentic Mexican- and Latin-style street food in Chicago, including tamales, banana leaf-wrapped tamales, tacos, quesadillas with fresh handmade corn tortillas, elotes and corn cakes.

Programming at Maxwell Street Market is supported by a generous grant from the National Endowment for the Arts. The market is open Sundays, from 9 a.m. to 3 p.m. For more information, visit maxwellstreetmarket.us or on facebook @MaxwellStreetMarket.

Chicago Department of Cultural Affairs and Special Events
The Department of Cultural Affairs and Special Events (DCASE) is dedicated to enriching Chicago’s artistic vitality and cultural vibrancy. This includes fostering the development of Chicago’s non-profit arts sector, independent working artists and for-profit arts businesses; providing a framework to guide the City’s future cultural and economic growth, via the 2012 Chicago Cultural Plan; marketing the City’s cultural assets to a worldwide audience; and presenting high-quality, free and affordable cultural programs for residents and visitors.

Posted by PIX INTERNATIONAL (pixintl) at 1:20 AM No comments:


Posted by PIX INTERNATIONAL (pixintl) at 11:02 PM No comments:

Posted by PIX INTERNATIONAL (pixintl) at 8:39 PM No comments:

From the deadly July 1995 Chicago heat wave,
deep into the politics of “disaster”

Chicago, IL, September 11 – Back by popular demand after selling out multiple screenings in its first run in July, Kartemquin Films presents the encore Chicago theatrical release of COOKED: Survival by Zip Code. A searing documentary on the politics of “disaster,” COOKED blends investigative reporting about the deadly 1995 Chicago heat wave - which led to the deaths of 739 people, mostly Black and in the poorest neighborhoods of the city - with a potent argument that the best preparation for a disaster may start with actually redefining the terms “disaster,” “preparedness,” and “resilience.”

On COOKED’s initial run, critics raved:
"For those who don't know the story: You need to see this movie."
– Richard Roeper, Chicago Sun-Times

"As Helfand asks, “What if with a slight torque of the system and a reframe of the terms ‘disaster,’ ‘preparedness’ and ‘resilience,’ we could invest in the most vulnerable communities now—instead of waiting for the next ‘natural disaster’?” Urgent questions, asked crisply and well."
– Ray Pride, New City

"Makes a persuasive argument that it’s time to broaden the definition of disaster— to include the vast and ongoing economic and community inequities."
– Nina Metz, Chicago Tribune

During the run, the filmmakers collected over 500 signed postcards addressed to Chicago Mayor Lori Lightfoot, urging her and her cabinet to declare racism a public health crisis. Audience members from 52 of Chicago's nearly 60 residential zip codes joined in this immediate call-to-action. On the second to last day of screenings, Cook County passed a resolution declaring racism and racial inequality a public health crisis.

In Helfand’s signature serious-yet-quirky connect-the-dots style, COOKED: Survival by Zip Code takes audiences into the deadly 1995 Chicago heat disaster, ties it back to the underlying manmade disaster of systemic structural racism and then goes deep into one of our nation’s biggest growth industries: Disaster Preparedness. Along the way she forges inextricable links between extreme weather, extreme wealth disparity and the politics of “disaster.”

The film had its world premiere at DOC NYC in 2018 and has since embarked on an award-winning festival run, recently winning the Jury Award for Best Feature Film at the 2019 EarthxFilm Festival and the People’s Choice Award at the 2019 Environmental Film Festival at Yale.

The film is slated for a broadcast premiere on the PBS strand Independent Lens in their upcoming 2020 season, and is about to launch a city-by-city engagement campaign.

ABOUT COOKED: SURVIVAL BY ZIP CODE
COOKED: Survival by Zip Code is Peabody Award-winning filmmaker Judith Helfand's searing investigation into the politics of “disaster” – by way of the deadly 1995 Chicago heat wave, in which 739 residents perished (mostly Black and living in the city’s poorest neighborhoods).

Asking open-ended questions that push people to deeply consider what it might mean to redefine the term “disaster” and reframe the concept of “resilience,” Helfand forges inextricable connections between the cataclysmic natural disasters we’re willing to see and prepare for and the slow-motion disasters we’re not – that is until an extreme weather event hits and they are made exponentially more deadly and visible. Using a combination of chutzpah, humor and candor, Helfand delves deep into one of our nation’s biggest growth industries: disaster preparedness.

Whether it’s a deadly heat wave in Chicago or Hurricanes Katrina, Sandy, Harvey or Maria, these disasters reveal the ways in which class, race, and zip code predetermine who lives and dies everyday, regardless of the weather and who gets hurt the worst and first in the wake of an “official disaster.” In COOKED Helfand challenges herself and ultimately all of us to respond to the man-made disasters taking place in towns and cities across the country before the next unprecedented “natural” disaster hits.

---
ABOUT KARTEMQUIN FILMS
Sparking democracy through documentary since 1966, Kartemquin is a collaborative community empowering documentary makers who create stories that foster a more engaged and just society.

The organization's films have received four Academy Award ® nominations and won several major prizes, including six Emmys, four Peabody Awards, multiple Independent Spirit, IDA, PGA and DGA awards, and duPont-Columbia and Robert F. Kennedy journalism awards. Kartemquin is recognized as a leading advocate for independent public media, and has helped hundreds of artists via its filmmaker development programs that help grow the field, such as KTQ Labs, Diverse Voices in Docs, and the acclaimed KTQ Internship.

Kartemquin is a 501(c)3 nonprofit organization based in Chicago. www.kartemquin.com
---

All screenings and events are at the Gene Siskel Film Center of the School of the Art Institute of Chicago, located at 164 N. State St.

About the School of the Art Institute of Chicago
For 150 years, the School of the Art Institute of Chicago (SAIC) has been a leader in educating the world’s most influential artists, designers, and scholars. Located in downtown Chicago with a fine arts graduate program ranked number two by U.S. News and World Report, SAIC provides an interdisciplinary approach to art and design as well as world-class resources, including the Art Institute of Chicago museum, on-campus galleries, and state-of-the-art facilities. SAIC’s undergraduate, graduate, and post-baccalaureate students have the freedom to take risks and create the bold ideas that transform Chicago and the world—as seen through notable alumni and faculty such as Michelle Grabner, David Sedaris, Elizabeth Murray, Richard Hunt, Georgia O’Keeffe, Cynthia Rowley, Nick Cave, and LeRoy Neiman. Learn more at saic.edu.
Posted by PIX INTERNATIONAL (pixintl) at 8:31 PM No comments: