Posted by PIX INTERNATIONAL (pixintl) at 11:26 AM No comments:

Posted by PIX INTERNATIONAL (pixintl) at 1:08 PM No comments:

Submit a memoir of 5,000 words or less.  Multiple entries are accepted.
Pages should be paper clipped, with your name, address, phone and title of work on the first page. Double-space, and use 12 point font.
The entry fee is $25 per story.  Enclose legal size self-sealing SASE for critique and list of winners.
Make check or money order payable to The Writers’ Workshop, and mail to:
Memoirs Contest, 387 Beaucatcher Road, Asheville, NC  28805.
Emailed submissions may be sent to writersw@gmail.com, with “Memoirs Contest” in the subject. Please send attachment in Word Document only. The entry fee is payable online at www.twwoa.org

Posted by PIX INTERNATIONAL (pixintl) at 12:57 PM No comments:

AT WHAT COST DO PHOTOJOURNALISTS CAPTURE WAR?

AT WHAT COST DO PHOTOJOURNALISTS CAPTURE WAR?

You are in the Bosnian town of Bijeljina. You photograph paramilitaries as they interrogate a young Albanian prisoner. Outside, the Serbs shoot a middle-aged woman pleading for her husband, then gun down another woman. “No photographs!” the soldiers yell, as the body of the prisoner, hurled from a mosque, lands at your feet.

Your own life at risk, do you put down the camera?

In the book Shooting War, (Glitterati Editions, November 2018) University of Toronto psychiatry professor Anthony Feinstein opens a new line of investigation into conflict by recounting the stories of the photojournalists who put their own lives in peril to document history as it unfolds.

Through a series of essays, each focusing on one of 18 of the world’s preeminent conflict photographers, Shooting War answers questions that have never been more relevant in a world of fragile journalistic safety and compromised integrity. Questions such as:

Complementing each essay is a single, iconic photograph around which the text is built. Derived from face-to-face interviews with the photojournalists, relatives, and close friends, the essays give new and revealing insights into those factors, professional and psychological, that motivate photographers to enter zones of conflict repeatedly and the consequences that come from exposure to grave danger:

While the text lays bare the traumas endured, the images speak to the resilience and creativity of the photographer in shaping our understanding of war and conflict. Together, they remind us of the vital role photographs play both in building awareness and serving justice.

As Sir Harold Evans says in his foreword, “Feinstein’s sensitive discussions with the photographers are profound, moving, and humbling…. [T]he eighteen photojournalists portrayed here, those who have preceded them, and those who will follow, deserve the full measure of our respect, gratitude, and admiration.”

ABOUT ANTHONY FEINSTEIN
Anthony Feinstein, Ph.D., is a neuropsychiatrist and professor of Psychiatry at the University of Toronto. He has authored a series of seminal studies exploring the psychological effects of conflict on journalists covering the Balkans, Iraq, Syria, Kenya, Iran and the refugee crisis in Europe. He is the author of Journalists Under Fire: the Psychological Hazards of Covering War (John Hopkins University Press, 2006) and Battle Scarred (Tafelberg Press, 2011). In 2000-2001 Feinstein was awarded a Guggenheim Fellowship to study mental health issues in post-apartheid Namibia. In 2012, he produced a documentary, “Under Fire”, based on his research of journalists in war zones. It was shortlisted for an Academy Award and won a 2012 Peabody Award. His Globe and Mail newspaper series bearing the same name as his new book, also titled Shooting War, was shortlisted for a 2016 EPPY award.

Posted by PIX INTERNATIONAL (pixintl) at 12:54 PM No comments: 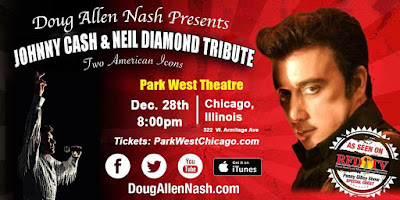 A country boy at heart! DOUG ALLEN NASH, who grew up on a farm in NW Illinois near Galena
began performing in local talent shows at age five and had formed his own band by age 12.
That was the same year his parents took him to a Johnny Cash concert. By the time he was 20 years old, Doug was performing all over the globe and receiving recognition for his extensive
USO Tours. It was at this time, during his travels, that Doug had a chance meeting with Johnny Cash at the Copenhagen, Denmark Airport! Subsequently, Nash saw Johnny Cash perform live
on several occasions. Today Doug Allen Nash is also a successful Nashville recording artist
who was inspired to create this tribute show and pen the ballad, "June" in honor of June
Carter Cash. The song was recorded at the Cash Cabin Recording Studio in Hendersonville,
Tennessee and co-produced by Grammy Award winners John Carter Cash and Chuck Turner.
Doug was inspired to include the Neil Diamond tribute because the legendary singersongwriter/
musician/actor has been a part of the American musical landscape for over fifty years. The
multitude of hit songs he has written, recorded and performed is the soundtrack of a
generation.
Doug has performed internationally in over 85 countries while touring for USO, MWR and
Armed Forces Entertainment. He was a featured artist on the Armed Forces Network commercial in Europe; and appeared on radio and television interviews as well as radio play on European
Music Charts. Nash has also performed nationally from the Las Vegas Strip to major casinos
and resorts such as Sun Valley, Idaho, Opryland Hotel and Taj Mahal in Atlantic City. He has
been the opening act for Wayne Newton, Charlie Daniels, Huey Lewis and the News, the Oak
Ridge Boys, Montgomery Gentry and other national recording artists as well as being the
house band for the largest grossing venue in Texas, "City Streets." Nash co-produced the trademark show "Almost Angels," a long-running production in Atlantic City. It is because of
Doug Allen Nash's great performances and charisma that he received the United States
Department of Defense's Certificate of Esteem Award; Certificate of Appreciation Award;
Republic of Korea's Apple of Excellence Award; and was inducted into the South Dakota
Country Music Hall of Fame.
Doug has performed many styles and varieties of music over the course of his career in the Entertainment Business and continues to be passionate about every performance.

Posted by PIX INTERNATIONAL (pixintl) at 10:03 PM No comments: