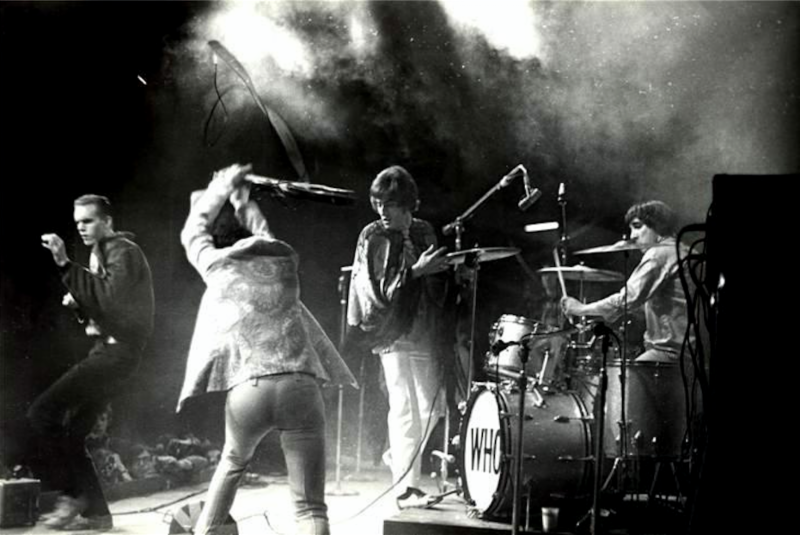 The Who by Henry Diltz, Monterey Pop Festival, 1967
Another Planet Entertainment and Goldenvoice in association with the Monterey International Pop Festival Foundation announced today that Morrison Hotel Gallery - the international leader in fine art music photography - is now the official gallery for the 50th anniversary celebration of The Monterey Pop Festival, occurring 50 years later. Morrison Hotel Gallery will be on site at the festival with a pop-up gallery that will have over 50 photographic prints for sale, of the artists that performed in the original Monterey Pop.
The dream of bringing together artistson the cutting edge of music in the name of charity, developed into what would become one of the seminal concerts in rock history. With the war in Vietnam on the world stage, cultural awareness and protest took a form of "music, love and flowers" with 170,000 people gathered at the Monterey Fairgrounds. The festival, produced by Lou Adler and John Phillips, was a beautifully orchestrated, peaceful gathering created a groundbreaking experience for attendees to embrace the music and be a part of what would become an explosion of culture that has impacted generations.
"Morrison Hotel Gallery is honored to be the official gallery, and part of the anniversary celebration of the historic Monterey Pop Festival. That's what our gallery is all about - the music, the history, the culture. It's what we and all the photographers we work with, represent, and it's coming full circle, 50 years later to the day, on the same spot," says gallery co-owner Timothy White.
Morrison Hotel Gallery co-owner and founder Henry Diltz - also the official photographer for Monterey Pop 50 years ago - will be on site to greet fans and sign autographs. A number of photographers represented by Morrison Hotel Gallery, who were on site at the original Monterey Pop Festival will be there to celebrate this culturally historic event with the gallery and fans. Filmmaker D.A. Pennebaker, the man behind the Monterey Pop movie, will also be on site at the gallery to talk to fans. All the photographs in this gallery will be for sale on site. There will also be a Monterey Pop exhibit at the NYC gallery from June 16th thru July 3rd.

Posted by PIX INTERNATIONAL (pixintl) at 1:46 PM No comments:

Chicago Antiques + Art + Design Show
Merchandise Mart, Chicago, Ill, May 18-21, 2017
Chicago, ILL., May 18-21, 2017 – The Chicago Antiques + Art + Design Show at the historic Merchandise Mart will offer an opportunity to view and purchase fine objects from throughout the nation and world at the four-day show, May 18-21, 2017.
For the first time it will feature a collection of rare documents and letters from Alexander Hamilton and Abraham Lincoln, from the Historic Documents and Legacy Collections of Seth Kaller, Inc., White Plains, NY (www.sethkallerinc.com).
“We’ll be showing a significant part of our Alexander Hamilton Collection, including a somewhat erotic handwritten letter from A. Hamilton to Eliza Schuyler in 1780, and a mere teaser for the astonishing Alexander Hamilton Collection. We will also highlight Abraham Lincoln documents, and a selection of other items from our inventory,” says Kaller, an acknowledged leader in the field of historical documents.
The show kicks off Thursday evening May 18 with a preview benefiting the Illinois Executive Mansion Association, from 6 to 9 p.m., hosted by former Governor James R. Thompson.
Synopsis of Items from the Seth Kaller Collection, on exhibition at the show:
Detailed Collection Information:
The Alexander Hamilton Collection is a Show-Stopping Gathering of Highly Important Original Letters, Documents and Imprints (or, the Genius, Passions, Foibles and Flaws of our Founding Fathers).  Visit with the orphan immigrant founding father who fought for independence, founded our financial system, and fostered a government capable of surviving internal factions and foreign foes.  The collection contains hundreds of documents from leaders, soldiers, citizens and the press, written when the Revolutionary War and Founding were current events. The Collection includes powerful letters and documents of Hamilton, George Washington, Thomas Jefferson, John Adams, Benjamin Franklin, and Aaron Burr, among many others.  See highlights here, or 156-page catalog here. The collection is priced at $2,300,000.
Even for Treason, Lincoln Can’t Fire an Appointee of N.Y.’s Governor.  In a complex matter involving allegations of treason, President Lincoln responds to a lawyer informing him that he has “no power to remove a Lieut. Colonel appointed by the Governor of New York.”  $22,000

Eliza Hamilton Dockets a Statement Sent to Her Husband.  A “Communication” sent to Alexander Hamilton, praising attorney Egbert Benson, who was instrumental in negotiating the land claim which New York had made to Vermont. Settling the land dispute was a congressionally mandated prerequisite for Vermont joining the Union as a state of its own, rather than being divided between New York and New Hampshire. $2,400
Thomas Paine Fights Foreign Interference: No King for America!  Paine asks a publisher for the source of a report, that Britain was behind a proposal “among the most influential federalists” recommending that the Duke of Clarence be made King of America (including Canada). This letter is a prime example from Paine’s campaign against any challenges to American democracy and independence. Paine responds to the report, “This might have been easily answered by saying We have blackguards enon of our own.”    $55,000

The Only Lincoln Letter to his Fiancée Mary Owens Still in Private Hands—Long on Politics, Short on Love.  In this highly important 1836 letter to his fiancée, Lincoln complains of his physical and mental health, and delves into Illinois politics.
“The new State House is not yet finished, and consequently the legislature is doing little or nothing. The Governor delivered an inflamitory political message, and it is expected there will be some sparring … as soon as the two Houses get to business…
The opposition men have no candidate of their own, and consequently they smile as complacently at the angry snarls of the contending Van Buren candidates and their respective friends, as the Christian does at Satan’s rage….
Though I belive I am about well now … other things I can not account for, have conspired and have gotten my spirits so low, that I feel that I would rather be any place in the world than here…. Write back as soon as you get this, and if possible say something that will please me, for really I have not been pleased since I left you. This letter is so dry and stupid that I am ashamed to send it, but with my present feelings I can not do any better…”
Lincoln’s letter may have revealed more than he intended. Owens later lamented his deficiencies “in those little links which make up the chain of a woman’s happiness.”    $390,000

Hamilton Asks His College Roommate and Two Other Friends to Pay Their Share for Surveying a Speculative New York State Land Investment.  In 1795 Hamilton and three friends purchased 21,800 acres in Herkimer County, New York. Hamilton’s quarter interest was worth about $9,000 at the time of his death.  $13,500

About Seth Kaller Inc.
Seth Kaller has acquired and represented some of the Nation’s most important documents including all six copies of the Emancipation Proclamation and all five copies of the 13th amendment to have come on the market in the last 20 years.  Seth Kaller, Inc. * Historic Documents & Legacy Collections, 235 Main St., Suite 510, White Plains, NY 10601;(914) 289-1776   www.sethkaller.com   seth@sethkaller.com

Posted by PIX INTERNATIONAL (pixintl) at 11:21 AM No comments:


Posted by PIX INTERNATIONAL (pixintl) at 10:55 AM No comments:

Posted by PIX INTERNATIONAL (pixintl) at 12:02 AM No comments:

Posted by PIX INTERNATIONAL (pixintl) at 12:56 PM No comments: