It's a Summer and Sun weekend as we play music that relates to that theme all weekend on Classic Hits 94.7 WLS, Chicago! Join me tonight and Sunday night from 7-11 p.m. It's the perfect sound track to your weekend. Listen on your FM at 94.7 in the Chicago area or catch the stream at http://www.947wls.com/
! Oh, and... turn it up LOUD!

Homestead – a literal farm-to-table restaurant – to open at 5pm on Friday, May 31 (Chicago)

Homestead patrons will enter the restaurant through Roots Handmade Pizza (1924 W Chicago Ave), and will be led upstairs to the unique dual space on the second floor. Homestead will not accept reservations.

Executive Chef Chris Curren – who has spent the last 11 years as a chef at some of the top restaurants in Chicago and Cleveland – has crafted a food menu for Homestead rooted in “rustic elegance” where he utilizes seasonal herbs, plants, vegetables, and fruits harvested from Homestead’s 1,000 square-foot organic rooftop garden, a private “Homestead-only” farm outside of the city of Chicago, other local and high-quality farms, and local-whenever-possible meat, seafood, and poultry purveyors.

Dishes marked with an asterisk (*) on Curren’s attached Homestead food menu indicate large/entrée plates. All of Curren’s other dishes on the Homestead menu are smaller/share plates. Curren’s Homestead menu is broken down into four sections.

One of Curren’s signature pastas is an agnolotti stuffed with sweet corn, manchego cheese, and shallots. The agnolotti is accompanied with wild mushrooms, baby squash, lardo, and chili powder. A parmesan-sweet corn broth is poured tableside for over the pasta and its accompaniments.

The menu’s fourth section, “From The Land” features six meat and poultry dishes. A highlight from this section is the “Crispy Duck Leg” which features a duo of duck (confit thigh and a tasso-cured breast) served atop wild black rice cooked polenta style, pickled blueberries, and spiced heirloom carrots.

Homestead Beverage Director Benjamin Schiller has created a tightly- curated specialty cocktail, spirits, wine, and beer lists. Many of these lists may evolve week to week.

Schiller will open with seven specialty cocktails – each priced at $10 each. All of his specialty cocktail (except for the bourbon-coffee essence-pipe tobacco “Weston”) were created with a sweet-and-sour backbone that were meant to be light, refreshing, and sessionable summer cocktails to be enjoyed on Homestead’s rooftop.

One highlight of Schiller’s specialty cocktail menu is the “Ghost Sign” which features a thinly sliced grapefruit wrapped around the inside of a Collins glass that’s mixed with tequila, Pimm’s, kumquat, and lemon.

Schiller’s Homestead spirits list features at most seven different types of each liquor while highlighting high-end and underappreciated brands in each category.

Beer-wise, Homestead will rotate a single brewery’s beers per week. Anchor Brewing out of San Francisco will be the first brewery featured at Homestead with two of its beers on tap and three available in bottles.

Executive Pastry Chef Chris Teixeira (formerly of four-star Chicago dining landmark Sixteen) will open with three composed desserts on the Homestead menu. The desserts will change every week or two based on what’s best and in-season.

Posted by PIX INTERNATIONAL (pixintl) at 6:30 PM No comments:

Posted by PIX INTERNATIONAL (pixintl) at 3:21 AM No comments: 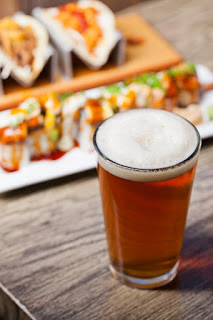 MAGIC HAT BREWING COMPANY BEER DINNER
(Schaumburg, IL)—On Monday June 24, 2013, Tokio Pub will continue its monthly tradition of hosting a unique, casual and ever-so-satisfying beer dinner partnering with the Vermont based Magic Hat Brewing Company for an unforgettable evening. Chef Naoki Nakashima will work with Chef Phu Lu and his team to bring The Green Mountain State to your doorstep "Tokio Style", while you sit back, imbibe and dine. Check-in begins at 6:30 p.m. and the first round of food will be served at 7:00 p.m. The cost is $30 per person (excluding tax and tip), reservations are recommended and can be made by calling 847.278.5181.
The evening will feature four rounds of food and Magic Hat Brewing Company beers and includes:
Round One
Roasted Beet and Goat Cheese Salad
Pyramid Hefeweizen

About Magic Hat Brewing Company
The Magic Hat Brewery has been putting a performance into every bottle of beer since 1994. Today, the South Burlington, VT-based brewery is cranking out 400 bottles of beer every minute and the brewing process, in all its strange and satisfying glory, has never been more accessible. The Magic Hat Artifactory, the nerve center of it all, is located in South Burlington, VT, and is ready to take your taste buds to places you never knew existed! The Growler Bar is a sight to behold with 48 taps a flowin' and a constantly changing line-up of Magic Hat's best beers, including all our year-round offerings, the current seasonal and even some experimental brews! For more information, visit www.magichat.net
.
Tokio Pub specializes in fresh Japanese cooking, served in a richly-hued dining room with lively music, friendly service & an edgy atmosphere. Located adjacent to Shaw's Crab House in Schaumburg's Streets of Woodfield, Tokio Pub is open for lunch, dinner & cocktails.
East Asian classics are blended with flavors from Japan & Latin America to create a unique pub menu. Try specialty Sushi, Tacos & our signature Hot Rock, along with Japanese Stir Fry, House-made Ramen & Tokio Pub's famous chocolate filled Beignets.
Tokio Pub is open Monday through Thursday, 11:30 a.m. to 10:00 p.m., Friday and Saturday from 11:30 a.m. to 12:00 midnight, and on Sundays from 11:30 a.m. to 9:00 p.m. Valet parking is available for $5 per vehicle, four season patio for 40 diners is available and all major credit cards accepted. For more info, call 847.278.5181, visit the website at www.tokiopub.com
, tweet at @Tokio_Pub, join the Mobile Club (text Tokio to 30364) or keep up on Facebook at www.facebook.com/tokiopub.

Posted by PIX INTERNATIONAL (pixintl) at 1:05 AM No comments: