CHAUFFEURED CUSTOM TOUR DESIGNED BY
CHICAGO DETOURS
Chicago Detours has partnered with Architecture & Design Film Festival and Audi to offer free custom guided tours to festival attendees throughout the day on April 14-15. The tour, entitled "From Miniature to Monumental: the Scale of the Home," whisks guests around Lakeview and Uptown in new Audis to stop at architectural landmarks, famous and lesser known.

Chicago Detours designed the tour to appeal to anyone from design enthusiasts to architecture experts. Rather than list factoids, the tour will explore the psychological and emotional ways that architects manipulate scale. Stops include the Alta Vista rowhouses, a George Maher home, Stanley Tigerman's Pensacola Apartment Building, and Graceland Cemetery. While some guests may have already visited these stops, this tour will point out specific visual details that may go unnoticed to the casual passerby or even the seasoned expert.

The 25-minute tours will be given 11am-7pm on April 14 and 15, and begin and end at the Music Box Theater, 3733 N. Southport Ave. These complimentary tours by car are expected to fill up, and the required reservations can be made online .

The Architecture & Design Film Festival includes feature-length films, docs, shorts, and lively discussions with design industry leaders. Chicago Detours will be offering a few giveaway tickets for ADFF films via social media leading up to the festival opening night on April 12, which begins with a screening of Ben Murray's Unfinished Spaces , a documentary set in Cuba.

Further information on Executive Director Amanda Scotese and Chicago Detours' public and private tours is available on the website, www.chicagodetours.com .

A WestBeth Entertainment and Henson Alternative production
Comes to Chicago at the Bank of America Theatre June 12 - 17, 2012
INDIVIDUAL TICKETS ON SALE SATURDAY, APRIL 14

Posted by PIX INTERNATIONAL (pixintl) at 12:39 PM No comments:

Posted by PIX INTERNATIONAL (pixintl) at 12:33 PM No comments: 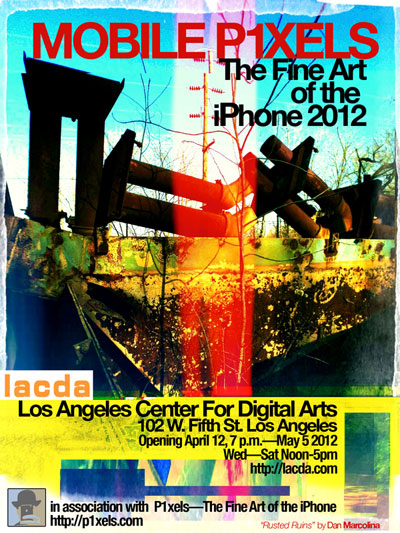 © 2012 Los Angeles Center For Digital Art
All International Rights Reserved.
Works of individual artists remain the intellectual property and are copyrighted by their respective authors.
No unauthorized reproduction, all rights reserved.
Posted by PIX INTERNATIONAL (pixintl) at 11:15 AM No comments:

My Dennis Tufano Photo book,Dennis Tufano,Oh-9 published in book form in 2009 is now available as a digital ebook for $10.99.
It's currently available thru blurb and will be available on iTunes shortly!
You can order directly from the link below.The format is in 'epub' which makes it readable on Apple iPads,iPhones and the Apple iTouch!

Book Preview
Posted by PIX INTERNATIONAL (pixintl) at 11:10 AM No comments:

Join host Elysabeth Alfano at the Mayne Stage Theatre the last Monday of every month for a live filming of THE DINNER PARTY
, a completely new and different kind of show. Alfano invites 3 artists and a celebrity chef to join in food, art, wine and conversation during this 1 hour show, which also streams live on the internet. Can't make the Mayne Stage? Watch THE DINNER PARTY live on www.FearNoART.tv and tweet in (and win prizes) to be a part of this fantastic new multi-dimensional show.
When: Last Monday of every month
Where & What: Live dinner, conversation, performances at the Mayne Stage Theatre
and streaming live on www.FearNoArt.tv
Price: $25 Buy tix to Mayne Stage
including food sampling, or free on-line viewing.
Mayne Stage: Doors open at 6:30. Starts at 7PM. No late seating. Dinner Sampling at 8:45 pm
Filming: Streaming On-line on FearNoART.tv
starts at 7:30 pm CST.
More Information, click on Fear No ART presents THE DINNER PARTY
.
The Dinner Party would like to thank Publican Quality Meats
, Vosges Haut Chocolat , 3Arts , the Driehaus Foundation , its media partner, Chicago Gallery News , Dessin Fournir , design corporation PC Cannon Frank , and its sponsors, L.H. Selman Gallery of Fine Glass Paperweights, Disaster Planning & Response Art Rescue and Le Cordon Bleu ® .

Posted by PIX INTERNATIONAL (pixintl) at 10:48 AM No comments: