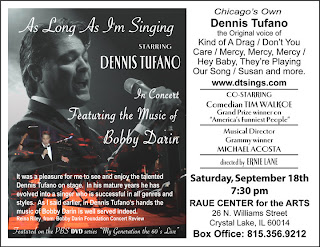 You can download the PRE-SALE order form here:
http://pixintl.com/DT_ALAIS_Raue.pdf

**Please note-the orders/payments will not be processed until July so this would just be to reserve tickets!**

From their web:
web: http://www.rauecenter.org/
The Raue Center is an intimate, independent performing arts center located in the heart of historic, downtown Crystal Lake, Illinois—right in the center of McHenry County.
The theatre is located at 26 N. Williams Street in Crystal Lake. Raue Center is easily reached by public transportation (the Metra Northwest stops less than two blocks north of the theatre) or by automobile. Less than an hour from downtown Chicago!


posted by Linda Matlow..live from New York!
Posted by PIX INTERNATIONAL (pixintl) at 2:19 PM No comments:

DON’T MISS OUT ON THIS “ABSURDLY FUNNY” SHOW!

CHICAGO (April 27, 2010)― Broadway In Chicago welcomes the two time Tony and Drama Desk Award winner, Alfred Hitchcock’s THE 39 STEPS, to the Bank of America Theatre (18 W. Monroe St.) for a limited two week engagement May 19 – 30, 2010. Mix a Hitchcock masterpiece with a juicy spy novel, add a dash of Monty Python and you have THE 39 STEPS. Tickets are currently available at BroadwayInChicago.com

(see below for more information).

Adapted by Patrick Barlow, directed by Maria Aitken and featuring sets and costumes by Peter McKintosh, the production is based on an original concept by Simon Corble and Nobby Dimon and on the book by John Buchan.

Seeking a frivolous night out at the theatre, Richard Hannay is lured into a world of intrigue by a mysterious woman claiming to be a spy. When she winds up dead in his flat, he flees London with the police hot on his trail. This is a classic portrayal of one man’s flight from wrong accusation through a series of misadventures and old fashioned romance. THE 39 STEPS features a cast of four actors who, against all odds, breathlessly and hilariously attempt to reenact all of the characters, locations and famous scenes in Hitchcock’s 1935 film thriller with just a few props and a lot of theatrical ingenuity and split second quick changes.

THE 39 STEPS opened to deliriously ecstatic reviews. Ben Brantley, New York Times, called the production, “Absurdly enjoyable! This gleefully theatrical riff on Hitchcock’s film is fast and frothy, performed by a cast of four that seems like a cast of thousands. The actors themselves seem to be having a helluva good time. As does the audience.” Clive Barnes, New York Post, pronounced THE 39 STEPS "Inventively astonishing, riotous & marvelous." Joe Dziemianowicz, Daily News, exclaimed, “Hitchcock probably never imagined his thriller had the makings of a hilarious comedy, but this show is a dizzy delight and an ingenious spoof, inventively directed by Maria Aitken. A fast-paced fun ride!”

THE 39 STEPS has been a runaway hit in London ’s West End , playing to sell-out houses at the Criterion where it continues to delight and thrill audiences. The first production of THE 39 STEPS was directed by Fiona Buffini and produced on stage by North Country Theatre in April 1996 at the Georgian Theatre, Richmond , North Yorkshire .

Performances are as follows:

Individual tickets are on sale and range in price from $20 to $72. Tickets are available at Broadway In Chicago Box Offices (24 W. Randolph St., 151 W. Randolph St. and 18 W. Monroe St.); the Broadway In Chicago Ticket Line at (800) 775-2000; Ticketmaster retail locations (including Hot Tix and select Carson Pirie Scott, Coconuts and fye stores); and online at www.BroadwayInChicago.com. Tickets are available to groups of 10 or more by calling (312) 977-1710.

For additional information on THE 39 STEPS, visit

or www.BroadwayInChicago.com
Posted by PIX INTERNATIONAL (pixintl) at 8:22 AM No comments: