The Conservation Center >> Conserving Relativity: A Display for Einstein & Other Projects

Posted by PIX INTERNATIONAL (pixintl) at 2:03 PM No comments:

Renée Taylor Brings Laughs to Skokie in "My Life on a Diet" (Skokie, IL.)

MY LIFE ON A DIET TO PLAY THE NORTH SHORE CENTER FOR THE PERFORMING ARTS IN SKOKIE JULY 16 – AUGUST 4
Academy Award-Nominated and Emmy Award-Winning Actress Renée Taylor Delivers Zingers and One-Liners Guaranteed to Make Audiences Howl with Laughter
“Fascinating. Lighthearted & Spicy.”
- THE NEW YORK TIMES, Elisabeth Vincentelli
“Still charming and sexy at 85, Taylor dishes out laughs and unexpectedly tender moments.”
- NEWSDAY, Joseph Amodio
“The inimitable Renée Taylor’s new show is wonderful. It’s an evening laced with love and laughter.”
- NEW YORK POST, Barbara Hoffman
“Astonishingly funny. I probably laughed harder, longer and more often at this show
than I have at all the comedies of this new century.”
- BROADWAY RADIO, Peter Filichia 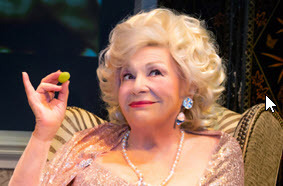 GENE SISKEL FILM CENTER (GSFC)
OF THE SCHOOL OF THE ART INSTITUTE OF CHICAGO (SAIC)
SCREENINGS AND EVENTS, JUNE 7-JULY 4, 2019

Series
Presented in cooperation with the Consulate General of the Czech Republic in Chicago, Czech That Film (June 7-July 2) showcases a selection of recent films from the Czech Republic. Titles featured are: HASTRMAN (June 7, 13) in which a mysterious nobleman returns to his crumbling ancestral property and takes an exceptional interest in a wild-spirited local maiden in this Gothic thriller; WINTER FLIES (June 9, 12) which concerns two boys who set out in a stolen Audi, picking up a female hitchhiker and rescuing a dog, before their adventure comes to a halt in a rural police station; JAN PALACH (June 14, 20), an engaging drama detailing the final months in the life of Jan Palach, the Czech national hero who died by self-immolation to protest the Soviet occupation of his country; GOLDEN STING (June 16, 17), a fictionalized underdog tale following the basketball team that scored the unprecedented Czech win of the European championship in Geneva in 1946; DESERTER (June 21, 24) in which an entrepreneur sees his swanky spa usurped by a communist party lackey, he takes revenge only to be faced with bitter repercussions; the 1950s-set SUITOR (June 23, 27), with the communist regime firmly in place, a father finds himself in conflict with his daughter after her fling with a penniless hunk proves to have staying power; PATRIMONY (June 28, July 1) involves the untimely death of a womanizing trumpet player who sets his widowed wife and his adult daughter off on a road trip to uncover family secrets; and DUKLA 61 (June 29, July 2) in which a 1961 mining disaster that took the lives of 108 men serves as the backdrop in this family drama concerning a college student returned home to become a miner with his pregnant girlfriend in tow. Actress Antonie Formanová is scheduled to be present for audience discussion on Tuesday, July 2, following DUKLA 61. The audience is invited to a reception sponsored by the Czech Consulate General in the Film Center’s Gallery/Café following the screening and discussion. http://www.siskelfilmcenter.org/czechthatfilm

Chicago premiere! ASAKO I & II (June 7-13) concerns college student Asako, who, two years after being deserted by her unreliable boyfriend, finds herself falling for Ryohei, a sensitive salaryman who is her ex-beau’s opposite in all ways...except for one. http://www.siskelfilmcenter.org/asako

First Chicago run! In SAUVAGE / WILD (June 7-13), a 22-year-old gay hustler cycles through a series of mostly sexual encounters that range from the achingly tender to the harrowingly brutal. Note: Contains scenes of explicit sexuality. http://www.siskelfilmcenter.org/sauvage--wild

Celebrated auteur Claire Denis upends the sci-fi genre in HIGH LIFE (June 14-20), the story of a spaceship populated by death-row convicts sent on a suicide mission to a black hole. http://www.siskelfilmcenter.org/high-life

Chicago premiere! In THE PROPOSAL (June 14-19), a conceptual artist and an art historian battle over the archive of Mexican architect Luis Barragán in this inventive documentary. Presented as part of Panorama Latinx. http://www.siskelfilmcenter.org/the-proposal

Chicago premiere! The engaging, locally made documentary NO SMALL MATTER (June 20-27) explores the importance of early childhood education. Co-directors Daniel Alpert, Greg Jacobs, and Jon Siskel, plus additional guests, are scheduled to be present for audience discussion at all screenings except for Friday, June 21, 4 pm and Sunday, June 23, 2 pm. http://www.siskelfilmcenter.org/no-small-matter

Chicago premiere! The inspiring documentary THE SPY BEHIND HOME PLATE (June 21-17) tells the story of Jewish American Moe Berg, a major-league catcher and agent working for the OSS during World War II. Director Aviva Kempner is scheduled to appear for audience discussion on Sunday, June 23. http://www.siskelfilmcenter.org/the-spy-behind-home-plate

Chicago premiere! Based on the filmmaker’s mother’s journey, the hand-drawn animation FUNAN (June 28-July 4) tells the story of a family’s persecution under Cambodia’s Khmer Rouge. http://www.siskelfilmcenter.org/funan

First Chicago run! The engrossing documentary THE RAFT (June 28-July 4) details an experiment that brought together 11 strangers on a raft set to drift across the Atlantic. http://www.siskelfilmcenter.org/the-raft

THE SUICIDE (June 8): The tension arising between the demands of activism and Gregg Bordowitz’s desire to explore aspects of his own life resulted in the appropriation of Nicolai Erdman’s avant-garde play The Suicide. Presented in collaboration with the Art Institute of Chicago’s exhibit I Wanna Be Well, April 4-July 14. http://www.siskelfilmcenter.org/the-suicide

Consuming seven years of labor and billed as the world's first fully oil-painted feature film, LOVING VINCENT (June 14, 15, 18) is a compelling, thoroughly researched dramatization of Van Gogh's life. Followed by LOVING VINCENT: THE IMPOSSIBLE DREAM, the story of how LOVING VINCENT came to be made. Note: There will be a 15-minute intermission. http://www.siskelfilmcenter.org/loving-vincent

Presented in 35mm! A corporate underling, paranoid about being cut out of a lucrative business deal, fears a trap is being set for him in David Mamet’s darkly humorous thriller THE SPANISH PRISONER (June 15, 18). http://www.siskelfilmcenter.org/the-spanish-prisoner

Chicago premiere! In WORLDS OF URSULA K. LE GUIN (June 15, 19), filmmaker Arwen Curry engages the feisty but camera-shy science-fiction author in a series of revealing interviews that explore her artistic and political evolution. The Saturday, July 15 screening will be followed by a panel discussion moderated by science-fiction author and UIC professor Mary Anne Mohanraj. Also featured on the panel are Madhu Dubey, UIC Professor of English and African American Studies, and Alec Nevala-Lee, author of Astounding: John W. Campbell, Isaac Asimov, Robert A. Heinlein, L. Ron Hubbard, and the Golden Age of Science Fiction. The Wednesday, June 19 screening will be followed by an audience discussion led by Prof. Mohanraj. http://www.siskelfilmcenter.org/worlds-of-ursula

Blending documentary and fiction, in A BIGGER SPLASH (June 29 + July 1, 3), director Jack Hazan features artist David Hockney as himself, an in-demand, gay artist struggling with a creative block after a breakup. http://www.siskelfilmcenter.org/a-bigger-splash

* * *
All screenings and events are at the Gene Siskel Film Center of the School of the Art Institute of Chicago, located at 164 N. State St.

Two-Film PASOLINI/SALÒ Discount (June 21-27): Buy a ticket at the regular prices for PASOLINI or SALÒ, and get a ticket for any show of the other film at this discount rate with proof of original purchase: $7/general admission; $5/students; $4/Film Center members. (This discount price applies to the second film only. Discount available in person at the box office only.)
* * *

About the School of the Art Institute of Chicago
For 150 years, the School of the Art Institute of Chicago (SAIC) has been a leader in educating the world’s most influential artists, designers, and scholars. Located in downtown Chicago with a fine arts graduate program ranked number two by U.S. News and World Report, SAIC provides an interdisciplinary approach to art and design as well as world-class resources, including the Art Institute of Chicago museum, on-campus galleries, and state-of-the-art facilities. SAIC’s undergraduate, graduate, and post-baccalaureate students have the freedom to take risks and create the bold ideas that transform Chicago and the world—as seen through notable alumni and faculty such as Michelle Grabner, David Sedaris, Elizabeth Murray, Richard Hunt, Georgia O’Keeffe, Cynthia Rowley, Nick Cave, and LeRoy Neiman. Learn more at saic.edu.