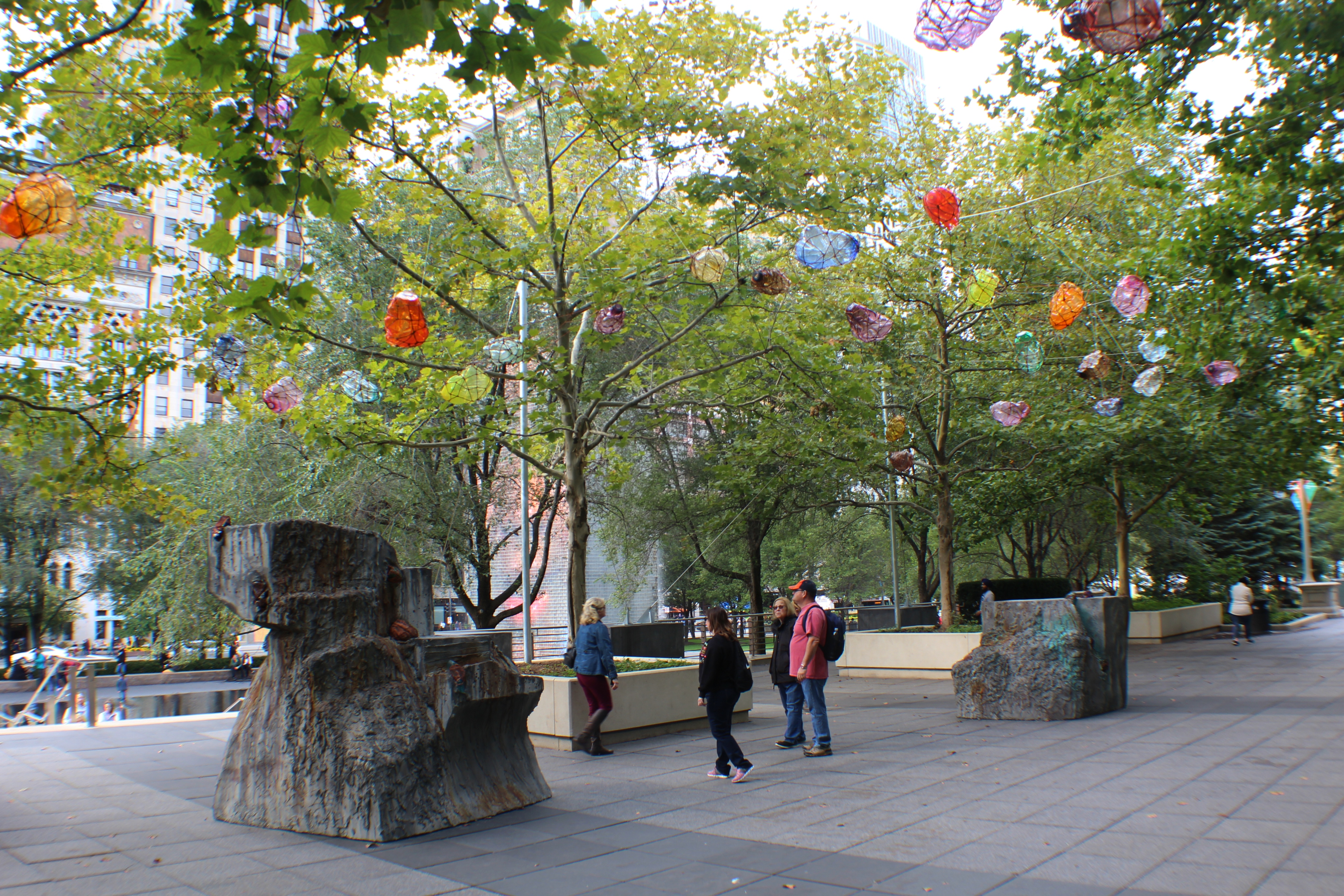 The Millennium Park Foundation and the Department of Cultural Affairs and Special Events are pleased to announce two new sculpture exhibitions located in the Boeing Galleries North and South. The newly commissioned works, on display through 2021, are site-specific installations by Chicago-based artists Edra Soto and Christine Tarkowski.

“Few spaces offer the expansive environment for monumental art of this scale, said Mark Kelly, commissioner of the Department of Cultural Affairs and Special Events. “The millions of visitors that come to visit Cloud Gate and Crown Fountain will be thrilled to engage with these new installations by two accomplished Chicago artists.”

“Millennium Park’s Boeing Galleries have an international reputation for presenting public art of an uncompromisingly high standard, said Scott Stewart, Executive Director of Millennium Park Foundation. Edra and Christine’s contributions promise to continue this tradition of excellence while also breaking new ground as unique, site-specific responses to Millennium Park and the Galleries themselves.

Edra Soto
Screenhouse
Boeing Gallery North
Constructed from approximately 400 charcoal-hued, 12-inch cast concrete blocks, the 10-foot high pavilion-like structure comes out of an ongoing series exploring symbolic transplants of iron grills and decorative concrete screen blocks found throughout the Caribbean and the American South. These decorative screens, known as rejas and quiebrasoles, are ubiquitous in Soto’s birthplace in Puerto Rico. In Screenhouse, Soto transforms the quiebrasol form from a planar screen that divides public from private into a nearly fully enclosed, free-standing structure that functions as both a sculptural object and a social gathering place.

Born in Puerto Rico and now based in Chicago, Edra Soto is an interdisciplinary artist, educator, curator and co-director of the outdoor project space THE FRANKLIN. Her recent projects, which are motivated by civic and social actions, focus on fostering relationships with a wide range of communities. Her work has been shown at museums throughout the United States and included in three exhibitions supported by the MacArthur Foundation’s International Connections Fund in Puerto Rico, Cuba and an upcoming 2020 project in Salvador, Brazil. Edra Soto holds an MFA from the School of the Art Institute of Chicago, and a BA from Escuela de Artes Plastics de Puerto Rico. She teaches Introduction to Social Engagement at University of Illinois in Chicago and is a lecturer at the School of the Art Institute of Chicago.

Christine Tarkowski
“When we call the Earth by way of distinction a planet and the Moon a satellite, we should consider whether we do not, in a certain sense, mistake the matter. Perhaps- and not unlikely - the Moon is the planet and the Earth the satellite! Are we not a larger moon to the Moon, than she is to us?”
Boeing Gallery South (photo)
Christine Tarkowski’s work is as extravagantly conjured as its title, taken from the 18th-century British astronomer William Herschel. The startling presence of candy-colored hand blown glass boulders suspended above and about earthbound boulders evokes a strange, yet elemental landscape–ironically similar to our environment, both natural and built. The installation, set down in the midst of the highly manicured garden of Millennium Park, seems a gentle critique of how cities build, manipulate, and re-present natural forms.

Christine Tarkowski is a Chicago-based artist who works in a variety of mediums including sculpture, printed matter, photography and song. Her works range in scale from the ordinary to the monumental. Equally variable is her scope of production which incorporates the making of permanent architectural structures, cast models, textile yardage and temporary printed ephemera. Many of her recent works point toward the flotsam of western culture relative to systems of democracy, religion and capitalism. Her solo exhibitions include Whale Oil, Slave Ships & Burning Martyrs at Priska Juschka Fine Art in New York, Imitatio Dei at the Museum of Contemporary in Chicago and Last Things Will Be First And First Things Will Be Last at the Chicago Cultural Center. She is a professor in the Fiber and Material Studies Department at the School of the Art Institute of Chicago.

Millennium Park is located on Michigan Avenue, bordered by Randolph St. to the north, Columbus Dr. to the east and Monroe St. to the south. The Park is open 6 a.m.–11 p.m. daily. For the latest news and events, download the Millennium Park app, visit millenniumpark.org, and follow on Facebook, Twitter and Instagram (@Millennium_Park).