Pioneering zoologist, women’s activist, and author,
Dr. Anne Innis Dagg,
returns to Chicago where, as a child, she saw her first giraffe,
for the premiere of poignant documentary. 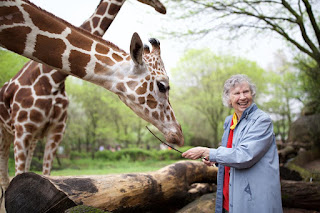 “A FASCINATING TALE…fine storytelling, combining ecology and social-justice issues while focusing on a woman ahead of her times” – Toronto Star

September 26, 2019 – Following sold-out film festival screenings the critically acclaimed feature documentary THE WOMAN WHO LOVES GIRAFFES will bow in Chicago at The Gene Siskel Film Centre for a week long run from October 11 through 17.

The Brookfield Zoo in Chicago plays an instrumental role in THE WOMAN WHO LOVES GIRAFFES. It is where Anne Innis Dagg fell in love with giraffes when she was only three years old. It is also where she returned over half a century later to receive an Excellence in Giraffe Science Award presented to her at the 2016 Giraffid Conference, which was hosted by the zoo.

THE WOMAN WHO LOVES GIRAFFES re-traces the trail-blazing journey of Dr. Anne Innis Dagg, who in 1956, at only 23 years old, became the first person in the world to scientifically research the behavior of an animal in the wilds of Africa, four years before Jane Goodall ventured into the world of chimpanzees and seven years before Dian Fossey left to work with mountain gorillas. The documentary offers an intimate account of her life as a young woman through personal correspondence and original 16mm film, juxtaposed with a first-hand look at the devastating reality that giraffes are facing today.

THE WOMAN WHO LOVES GIRAFFES explores the insurmountable barriers Dagg faced as a female biologist whose research findings ultimately became the foundation for many scientists following in her footsteps. Though her pioneering efforts were groundbreaking, upon her return to North America, her career as a professor was destroyed when she applied for tenure in the 1970s was denied. It was the catalyst that transformed Dagg into a feminist activist.

Director Alison Reid says: “Chicago plays such an important role in Anne’s story. It’s where her mother was born and where her love affair with giraffes began—and it is also where Anne was celebrated by her peers after being re-discovered. Filming Anne interacting with the giraffes at The Brookfield Zoo was amazing and now to be showing our film at the Gene Siskel brings things full circle.”

The film was made with the participation of Ontario Creates Film Fund, Telefilm Canada and the Rogers Group of Funds through the Theatrical Documentary Program, the Rogers Documentary Fund, KinoSmith Inc., and Rogers Telefund. It is a Bell Media/Crave Original Documentary.

Tickets to each screening are $12/general admission, $7/students, $6/Film Center members, and $5/Art Institute of Chicago (AIC) staff and School of the Art Institute of Chicago (SAIC) faculty, staff, and students. All tickets may be purchased at the Film Center Box Office. Both general admission and Film Center member tickets are available through http://www.siskelfilmcenter.org/the-woman-who-loves-giraffes. There is a surcharge of $1.50 per ticket. The Film Center and its box office are open 5:00 to 8:30 pm, Monday through Thursday; 1:00 to 8:30 pm, Friday; 2:00 to 8:30 pm, Saturday; and 2:00 to 5:30 pm, Sunday.

About the School of the Art Institute of Chicago
For 150 years, the School of the Art Institute of Chicago (SAIC) has been a leader in educating the world’s most influential artists, designers, and scholars. Located in downtown Chicago with a fine arts graduate program ranked number two by U.S. News and World Report, SAIC provides an interdisciplinary approach to art and design as well as world-class resources, including the Art Institute of Chicago museum, on-campus galleries, and state-of-the-art facilities. SAIC’s undergraduate, graduate, and post-baccalaureate students have the freedom to take risks and create the bold ideas that transform Chicago and the world—as seen through notable alumni and faculty such as Michelle Grabner, David Sedaris, Elizabeth Murray, Richard Hunt, Georgia O’Keeffe, Cynthia Rowley, Nick Cave, and LeRoy Neiman. Learn more at saic.edu.

Posted by PIX INTERNATIONAL (pixintl) at 11:19 AM