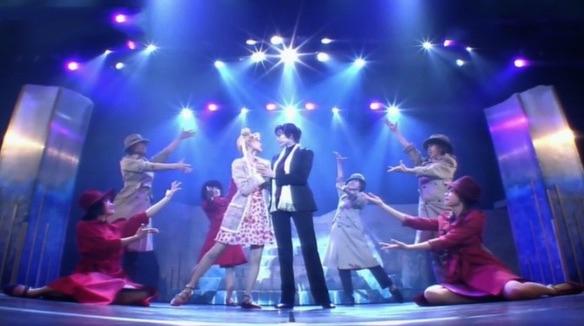 Sailor Moon fans across the United States will be treated to the manga-based Japanese live stage production in larger than life HD on cinema screens in select markets.  Spotlight Cinema Networks’ new Event Cinema division, CineLife Entertainment, announced today that “Pretty Guardian Sailor Moon: The Musical -Le Mouvement Final-,” which is being released in association with Tokyo-based Live Viewing Japan, begins screening March 10th, 2018, is the first time that this production will be released in any format in the U.S. Locations are being added and found at www.sailormoonlive.com
Sailor Moon is a multi-million-dollar media franchise in Japan that reached U.S. shores in 1995 starting with the original animated TV series.  Since then, the franchise has grown to a merchandising powerhouse that includes comics, toys, and numerous releases on home video.
In Pretty Guardian Sailor Moon: The Musical-Le Mouvement Final-, a new enemy - the Shadow Galactica, are aiming to steal Sailor Crystals.  At the same time, a mysterious young girl named Chibi-Chibi and a new group of Sailor Guardians, the Sailor Starlights  also appears, and a battle of an unprecedented scale begins.  Featuring lavish musical numbers and dazzling costumes and sets, Pretty Guardian Sailor Moon: The Musical-Le Mouvement Final- will bring for the first time a 2.5 dimensional musical to movie theaters across the United States, just in time for the 25th anniversary celebration of the Sailor Moon franchise.
“Naoko Takeuchi’s Sailor Moon series has been extremely popular in the United States for the past quarter of a century.  In Japan, the Sailor Moon musical adaptations have been a fan favorite for years and we are excited to bring this major cinema event to manga and anime fans across the U.S.,” said Mark Rupp, Managing Director, CineLife Entertainment.
To get more information on “Pretty Guardian Sailor Moon - Le Movement Final: The Musical,” please visit http://www.sailormoonlive.com
Download the CineLife App for Locations and Showtimes http://cinelife.com
Facebook:  @sailormoonmusical   Twitter:@Sailor_Live
About the Creator
Naoko Takeuchi is a Japanese manga (comic) artist best known as the author and artist of Sailor Moon, one of the most popular manga series of all time. She also won for Love Call, which won Nakayosi's New Artist award which debuted in the Nakayosi Deluxe September 1986 issue. In 1993 Takeuchi won the 17th Kodansha Manga Award for shōjo (girls comics) for Sailor Moon. 2018 marks the 25th anniversary of the debut of the Sailor Moon manga in 1991, and continues to be a pop culture phenomenon to this very day. Celebrations include a 25th Anniversary Orchestral Concert, the Pretty Guardian Sailor Moon: The Musical-Le Mouvement Final- stage musical and Sailor Moon: The Miracle 4D, a new attraction at Universal Studios Japan.

About Spotlight Cinema Networks
Spotlight Cinema Networks is the only cinema advertising company 100% dedicated to luxury and art house theatres. The company is a national advertising vehicle with a focus on the top 25 DMAs. Our exhibitor partners specialize in the best of independent and "smart" Hollywood films.  Spotlight Cinema Networks is owned by Wagner-Cuban Companies and Arthouse Marketing Group, and represents the top exhibitors in this genre, including segment leaders Angelika Film Center, Laemmle Theatres and Landmark Theatres. The company is headquartered in Los Angeles, CA, with offices in New York and Chicago.