Posted by PIX INTERNATIONAL (pixintl) at 1:18 PM No comments:


From All-Pro football star to Hollywood producer/actor, Kerry Rhodes is about to score off the field with his soon to be released, critically-acclaimed horror-comedy, Tragedy Girls. Earning a 100% audience score on Rotten Tomatoes, Tragedy Girls is slated for release on October 20th.
Kerry stars opposite Deadpool’s Brianna Hildebrand, X Men: Apocolypse’s Alexandra Ship, Hall Pass’s Nicky Whelan in the film that’s being hailed as the next Scream. The All-Star cast also features Josh Hutcherson (The Hunger Games), Craig Robinson (Hot Tub Time Machine), Kevin Durand (X-Men Origins: Wolverine), and Jack Quaid (The Hunger Games, Vinyl). Tragedy Girls follows two death-obsessed teenage girls who use their online show about real-life tragedies to send there small midwest town into a frenzy, cementing their legacy as modern horror legends. Tragedy Girls has won the Horror Channel Award, Best Movie at Fright Festival, and Macabre Award for Best Film at the Latin America Film Festival.
Critics are calling Tragedy Girls  “… impressively ballsy, stingingly funny…” and …”gruesomely creative…”
After an impressive 8 year career in the NFL as a leading safety for the NY Jets and the Arizona Cardinals, Kerry would pursue his passion to act and produce, beginning with the documentary Gone In A Instant, which follows Antoine Walker, a three-time NBA All Star who lost $110 Million in Las Vegas.  He then formed the production company The Comeback Kids (Gone in an Instant). He has produced Protocol, The Decision, General Education, Queen of Media, and Reservation.
Kerry’s other acting credits include;  Tyler Perry’s If Loving You is Wrong, Good Cop, Bike Cop, Slate Your Name, and #TheAssignment.
Named to Esquire Magazine’s “Best Dressed Player in the NFL” list, and as one Yahoo’s “Hottest NFL Stars,”  In addition to acting and producing, Kerry helms The Rhodes Foundation, a charity which “provides ooortunities for college-bound youth in impoverished communities.  Kerry recently married actress Nicky Whelan and resides in Los Angeles with their dog Yoda.
https://www.youtube.com/watch?v=3GmFP7pfz1U

From March 29th through April 14th, 2018, venues throughout Savannah’s Historic District will be filled with the extensive concerts, recitals, dance parties, film, theatrical and multi-disciplinary productions that make up the 29th edition of the Savannah Music Festival (SMF). Operating in multiple venues for the first 16 days of the 2018 festival, the organization presents its most ambitious classical music programming to date, extensive world music offerings and a hard-hitting week of jazz and acclaimed Americana and folk music artists, in addition to theatrical productions and films. On April 14th, the final day of SMF 2018, an all-day multi-stage event is scheduled for the newly-renovated event spaces at Trustees’ Garden. “We’re thrilled to incorporate two new venues including into this year’s festival,” remarks Executive & Artistic Director Rob Gibson. “In addition to the fabulous new Yamacraw Center for the Performing Arts concert hall, we are elated to utilize one of Georgia’s most historical outdoor sites at Trustees’ Garden. With the multitude of artists and patrons that impact our city across nearly three weeks, these new spaces offer a unique opportunity to build on our mission of creating a high-quality exchange between artists and audiences in Savannah.” Tickets to the 2018 festival go on sale at 10am EST on November 10th, 2017, online at savannahmusicfestival.org, by phone at 912.525.5050 and in person at 216 E. Broughton Street.

Theatrical and film presentations
In Death of A King, Tavis Smiley delves into the final year of Martin Luther King, Jr.’s life in a multi-media presentation with an original score by SMF Associate Artistic Director Marcus Roberts. Performance collective Manual Cinema performs their original work, Lula del Ray, a mythic reinvention of a classic coming-of-age story, and PIAF! The Show features Anne Carrere as Edith Piaf in a production directed by Nice-based theater maverick Gil Marsalla. Films at SMF 2018 include two with original live scores: BiRDMAN LiVE is a screening of the Academy Award-winning “Birdman or (the Unxpected Virtue of Ignorance)” scored by jazz drummer Antonio Sanchez, and “The Goddess,” a 1934 Chinese silent film with original score by Juana Molina. “Terezín: Refuge in Music” featuring Daniel Hope and Anne Sofie von Otter is a documentary about music composed by victims and survivors of the Nazi concentration camp.

For the complete schedule, visit www.savannahmusicfestival.org

About the Savannah Music Festival
A non-profit performing arts organization, the Savannah Music Festival (SMF) is dedicated to presenting world-class celebrations of the musical arts by creating timeless and adventurous productions that stimulate arts education, foster economic growth and unite artists and audiences in Savannah. In addition to year-round music education and broadcast initiatives, SMF produces one of the most distinctive cross-genre music festivals in the world. The 2018 festival runs from March 29 through April 14, including more than 100 performances in venues throughout Savannah’s historic district. For more information visit www.savannahmusicfestival.org.

Posted by PIX INTERNATIONAL (pixintl) at 11:10 PM No comments:

Fire Departments and other local partners team up with Red Cross volunteers to help reduce home fire tragedies in at-risk communities
The American Red Cross announced today that one million s have been installed and 285 lives have been saved due to the efforts of the volunteers and community partners who have participated in the organization’s Home Fire Campaign.

“Since 2014, Red Cross volunteers in Chicago, northern Illinois and across the country have been working with local fire departments and community partners to reduce home fire tragedies in at-risk communities,” said Celena Roldán, Chief Executive Officer of the American Red Cross of Chicago & Northern Illinois. “We are grateful to everyone who has supported our Home Fire Campaign and helped us reach our one-millionth free smoke alarm milestone and save lives.”


With the support of 4,400 partner organizations, the Red Cross has helped to make more than one million people safer through home visits to install free smoke alarms, assist families with developing fire escape plans and provide home fire safety education. Since 2014, the Campaign has also reached nearly 895,000 kids through youth preparedness programs, helped to create more than 340,000 home fire escape plans, and replaced more than 51,000 smoke alarm batteries.
American Red Cross CEO and President Gail McGovern was recently featured on the Wendy Williams show talking about the lifesaving importance of smoke alarms. Tomorrow, Greater New York Regional Executive Josh Lockwood will be featured on Good Morning America along with a representative of the Fire Department of New York to continue celebrating this milestone achievement.
This spring, the Red Cross will Sound the Alarm through a nationwide series of home fire safety and smoke alarm installation events from April 28 to May 13, 2018. Working with volunteers and partner organizations, the Red Cross plans to install 100,000 free smoke alarms across more than 100 major cities. Volunteers and financial contributions are needed.
Join this Red Cross effort today by volunteering to install smoke alarms in your community, making a financial contribution, or taking steps to protect your own family from home fires. Together, we can Sound the Alarm about fire safety and help save lives. Visit SoundTheAlarm.org for more information.
This work is made possible thanks to generous financial donations from national partners: Almost Family, Delta Air Lines and International Paper. The Red Cross has also received funding from FEMA through the Assistance to Firefighters Grant Program.
About the American Red Cross of Chicago & Northern Illinois:
The American Red Cross of Chicago & Northern Illinois serves 9.5 million people in 21 counties including Boone, Bureau, Carroll, Cook, DeKalb, DuPage, Grundy, Kane, Kankakee, Kendall, Jo Daviess, LaSalle, Lake, Lee, McHenry, Ogle, Putnam, Stephenson, Whiteside, Will and Winnebago. The American Red Cross shelters, feeds and provides emotional support to victims of disasters; supplies about 40 percent of the nation's blood; teaches skills that save lives; provides international humanitarian aid; and supports military members and their families. The Red Cross is a not-for-profit organization that depends on volunteers and the generosity of the American public to perform its mission. For more information, please visit us at redcross.org/il/chicago or visit us on Twitter @ChicagoRedCross.

Posted by PIX INTERNATIONAL (pixintl) at 11:09 AM No comments: 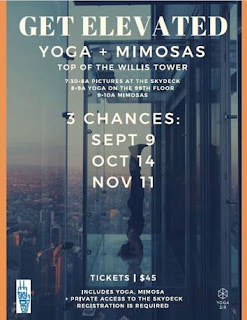 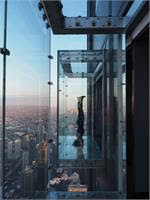 This Saturday, November 11, Willis Tower’s Skydeck Chicago and Yoga Six will host Get Elevated: Yoga + Mimosas at Willis Tower’s Skydeck Chicago. From 7:30am-8am, guests will have private access to the Ledge on the 103rd floor for photo opportunities before the all-levels Vinyasa Flow class begins at 8am for one hour on the 99th floor. Mimosas will be served from 9-10am.

Tickets cost $45 and includes the one hour class, one mimosa, and private access to Skydeck Chicago. Tickets are available for purchase here.

At 1,353 feet up, The Ledge’s glass boxes extend out 4.3 feet from the skyscraper’s Skydeck on the 103rd floor, allowing views of up to 50 miles and four states.

Posted by PIX INTERNATIONAL (pixintl) at 11:00 AM No comments:

Posted by PIX INTERNATIONAL (pixintl) at 10:57 AM No comments: