Posted by PIX INTERNATIONAL (pixintl) at 11:17 AM No comments:


Quad Cities-style malt crust pizza; massive “build your own salad” menu; award-winning housemade mozzarella sticks; “Foldover” sandwiches; 100+ Midwest-only craft beer list; house & classic cocktails; and more
Greg Mohr and Scott Weiner -- co-owners of The Fifty/50 Restaurant Group -- will open their second location of Roots Handmade Pizza to the public at 11am on Saturday, December 19 at 2200 W Lawrence Ave in Lincoln Square.
The Roots location in Lincoln Square will be open Sundays thru Fridays from 11am until 2am and on Saturdays from 11am until 3am. Delivery and carryout will begin at a later date. The Lincoln Square Roots phone number is 773-433-5959 and the website is http://www.rootspizza.com.

The second location of Roots will be the seventh different restaurant opened by Mohr – a Quad Cities native from Rock Island, Illinois – and Weiner. The first Roots location opened in West Town at 1924 W Chicago Ave in May 2011.
In addition to the two Roots locations the restaurant group also includes The Fifty/50, Homestead On The Roof, two West Town Bakery locations, and The Berkshire Room. The eighth location – and sixth unique concept – from The Fifty/50 Restaurant Group – called “The Sixth” does not have an opening date yet. The Sixth is Mohr and Weiner’s 45-seat neighborhood cocktail bar with beverage director/partner Benjamin Schiller that is located next door to the Roots Lincoln Square location and shares the same physical address.
The Roots Lincoln Square location has approximately 22 bar seats and about an additional 120 seats at tables. (An outdoor sidewalk patio seating area is scheduled to open in spring of 2016). The sleek and bright and modern yet classic Roots Lincoln Square location interior design was done by blocHaus ( http://www.blochaus.com ) which also designed The Berkshire Room, Lillie’s Q, Dana Hotel & Spa, Milt's Barbeque for the Perplexed, Epic Sky, and others.
Design elements of Roots Lincoln Square interior include white and red subway tile, an interior lighted marquee in the design of the Roots handprint logo, light white oak wood tables and wall accents, red booths, custom copper pipe lighting, and custom Sabine floor tiling accents. There’s also a special seating area designed that was inspired by the Rock Island Railroad in the Quad Cities (and the table tops are branded with the Rock Island Railroad logo). These specialty tables are on castors and sit in railroad-like tracks in the floor – the tables are movable along the tracks and customizable and can be locked in and configured from two tops to up to a single 30 top.
Executive chef/partner Martin Arellano will helm the Roots Lincoln Square kitchen. Arellano was the opening executive chef at Roots West Town location when it opened back in May of 2011. Arellano was also a “Day One” employee of The Fifty/50 upscale sports bar and comfort food restaurant when it opened back in March of 2008 where he started as a line cook and eventually moved his way up to executive chef. Before joining The Fifty/50, Arellano was a cook at four-star Spiaggia; Joe's Seafood, Prime Steak & Stone Crab; and the private stadium club at Wrigley Field.
Roots specializes in Quad Cities-style malt crust pizza. A primer on what Quad Cities style malt crust pizza is located at the bottom of this press release. In addition to classic Quad Cities style malt crust specialty pizzas (Taco, Sausage, BLT, Garden, etc), Roots has wildly popular “Chef Series” pizzas where chefs from local restaurants put their unique spin on Quad Cities style malt crust pizza dough.
Those “Chef Series Specialty Pizzas” include a bacon & Brussels sprouts pizza from chef Ed Sura of Perennial Virant, a duck sausage BLT pizza from chef Aaron Silverman of Bangers & Lace, a BBQ pulled pork pizza from chef Charlie McKenna of Lillie’s Q, a chorizo chili cheese curd pizza from chef Rick Ortiz of Antique Taco, and a beef short rib pizza from chef Chris Davies of Homestead On The Roof.

Roots also specializes in award-winning housemade mozzarella sticks and other appetizers, specialty salads and a build-your-own option with over 50 available ingredients, “Foldover” sandwiches which are Roots’ take on calzones utilizing its malted pizza dough, housemade pastas, specialty sausages, sides, and desserts.
New food menu items include a “loaded” hummus with a choice of fresh-made topping, garlic parmesan bread sticks appetizer, fried eggplant appetizer, chicken tortilla soup, and a kale & roasted Brussels sprouts salad.
Full Roots Lincoln Square food menu link here:
http://www.rootspizza.com/website/documents/menu.pdf
Full Roots Lincoln Square dessert menu here:
http://www.rootspizza.com/website/documents/roots-dessert-specials-menu.pdf
When the Roots Chicago Avenue location opened back in 2011, it is believed to be the first restaurant or bar in Chicago that had a Midwest-only beer list. That tradition continues at the new Lincoln Square location which features 22 draft beer lines and 100 bottles and cans – all dedicated to Midwestern craft beer from the likes of Pipeworks, Three Floyds, Founders, Moody Tongue, Revolution, Dark Horse, Half Acre, Surly, Greenbush, and more. Roots Lincoln Square also has a draft beer line specifically dedicated to small craft breweries that self-distribute (Arcade, Aquanaut, Marz, Lake Effect, etc.)
Roots also features house cocktails, classic cocktails, and a cocktail of the month that utilizes a base spirit specifically distilled and bottled in the Midwest (which for the remainder of December and all of January will be a “Nordic Old Fashioned” made with North Shore Distillery Aquavit Private Reserve.
House cocktails include a boilermaker with a Bell’s Kalamazoo Stout and a shot of Basil Hayden's bourbon that was aged in a Basil Hayden's barrel that had also previously aged Dark Matter Coffee beans, a refreshing Strawberry Cooler, Boomerang Daiquiri utilizing The Aviary’s Micah Melton’s complex cherry Boomerang liqueur and dark rum, and a housemade Bloody Mary that’s able to be topped with one of Roots’ housemade mozzarella sticks for a $2 uncharge.

Classic cocktails include Negroni, Dark N' Stormy, Sazerac, Old Fashioned, Manhattan, and a gin or vodka martini served with Roots housemade mozzarella stuffed olives.
Roots liquor selection includes Midwestern distilled spirits along with bourbon, whiskey, and ryes from Kentucky. Roots also features 18 wines by the bottle (with all but two bottles also available by the glass), and its own housemade “Roots Root Beer” in bottles.
Full Roots Lincoln Square beer/cocktail/spirits/wine menu link here:
http://www.rootspizza.com/website/documents/roots-beer-menu-lincoln-square.pdf
The primer on Quad Cities-style malt crust pizza is below:
What is Quad Cities pizza?
There are six things that make Quad Cities pizza unique:
Malt Crust The housemade pizza dough contains a heavy dose of dark-roasted brewer’s malt that gives the pizza crust a darker appearance and tastes nuttier and slightly sweeter than other pizza crusts.
Hand Tossed The pizza dough does NOT go through a machine or sheeter. It’s first hand-stretched and then hand-tossed until it’s about a quarter inch in thinness with a slightly elevated lip around the entire round. The end result is a cooked pizza crust that is crusty on the outside and chewy and airy inside.
Pizza Sauce Due to a unique mix of spices, Quad Cities pizza sauce is thin and smooth and comes off as slightly spicy. A very thin layer of sauce in applied to all Quad Cities pizzas at Roots.
Top Quality Ingredients Roots uses fresh Wisconsin mozzarella cheese that has a particular fat and moisture content and it’s applied liberally to every pizza. This cheese will not lend itself to greasy, oil-slicked pizza.
A signature staple of Quad Cities-style pizza is sausage.  The sausage is a lean and non-greasy pork sausage that is heavy on fennel and other spices.  First the sausage is ground in house and then cooked and allowed to rest in its own juices so they redistribute throughout the meat.  After resting for several hours the sausage is ground finer a second time with a different spice mix and the meat becomes light and fluffy. The very finely ground sausage is spread very liberally over the entire pizza from edge to edge.
Another Quad Cities pizza signature is that almost all of the toppings – including the sausage and other fresh toppings  – go under the cheese.
Scissor Cut Strips Per tradition that started about 55 years ago in the Quad Cities, the pizza hand-cut into strips (not slices) using giant razor-sharp scissors. A large 16” pizza will have 14 strips, and a small 12” inch pizza will have 10 strips. After it is cut, Quad Cities pizza regardless of size contains four “corner pieces” that are mostly crust. These special strips are the first grabbed and eaten by people who are true Quad Cities pizza fans.
A Special Pizza Oven Roots, like nearly every Quad Cities pizza place, uses a Roto-Flex gas oven to cook its pizzas. The large Roto-Flex oven at Roots can cook about 28 large pizzas at a time via its four clockwise-rotating decks. The average pizza cooking time is about 12 minutes.
Posted by PIX INTERNATIONAL (pixintl) at 12:30 PM No comments:

Posted by PIX INTERNATIONAL (pixintl) at 11:47 AM No comments: 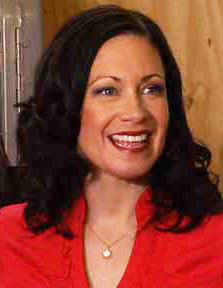 The Dinner Party To Go with Elysabeth Alfano
gets homey! I interview director, Josh Mond, and actor, Christopher Abbott, of the award winning film James White from my boyfriend's kitchen. Over coffee and bagels with these two New Yorkers, we talk about the making of this brilliant indie movie that has talk of an Academy Award nomination. Listen to the podcast by clicking here or below. 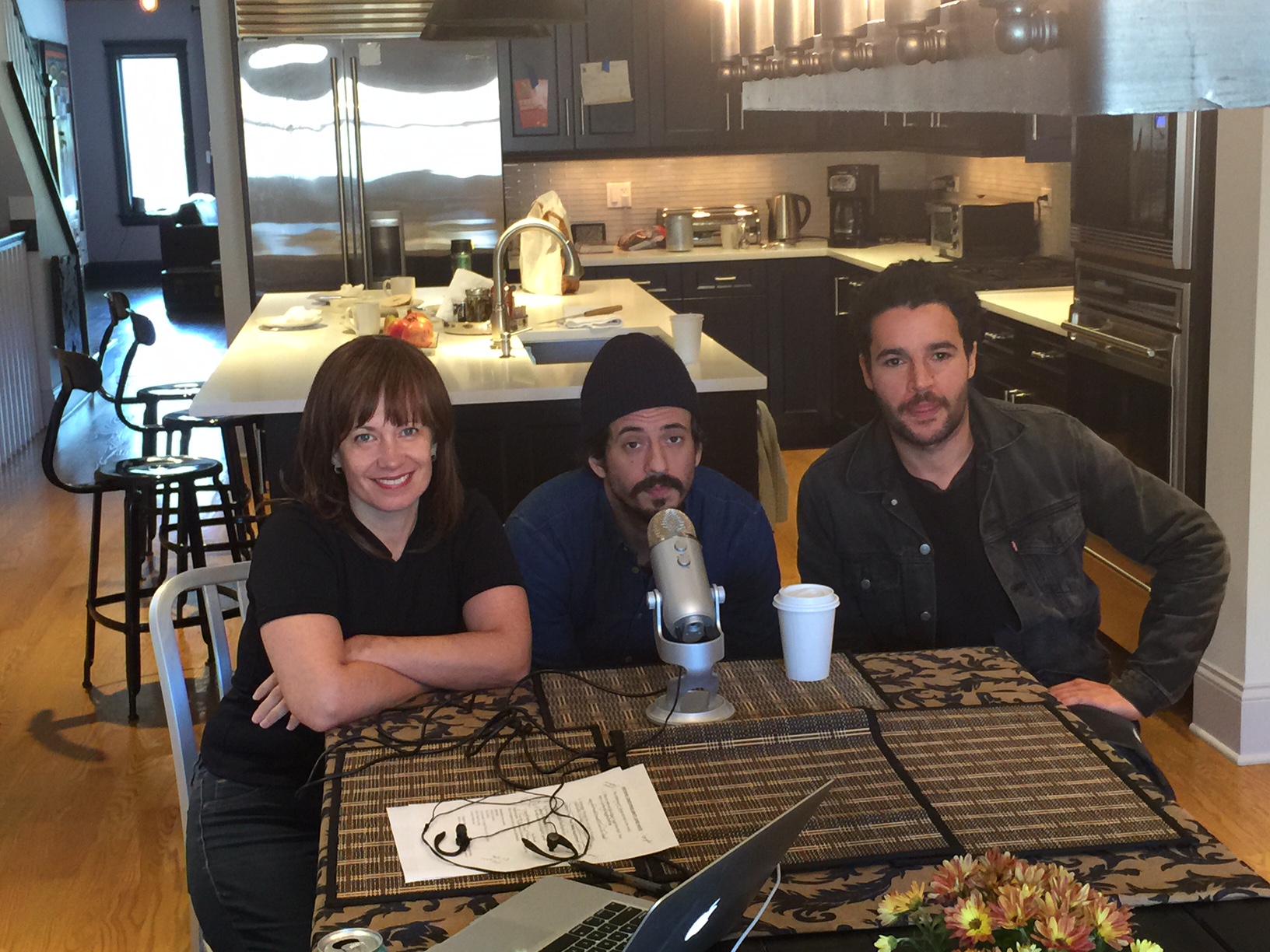 Race relations in Chicago always make for a dicey and passionate dialogue. Back at WGN Studios, I sit down with author of 1968: A Story As Relevant Today As It Was Then
, Bill Natale. Over Crab Cakes, Miso Glazed Salmon, Roasted Baby Octopus and Charcuterie from Epic Restaurant, Bill and I hit on an epic conversation. Click here or below to listen. 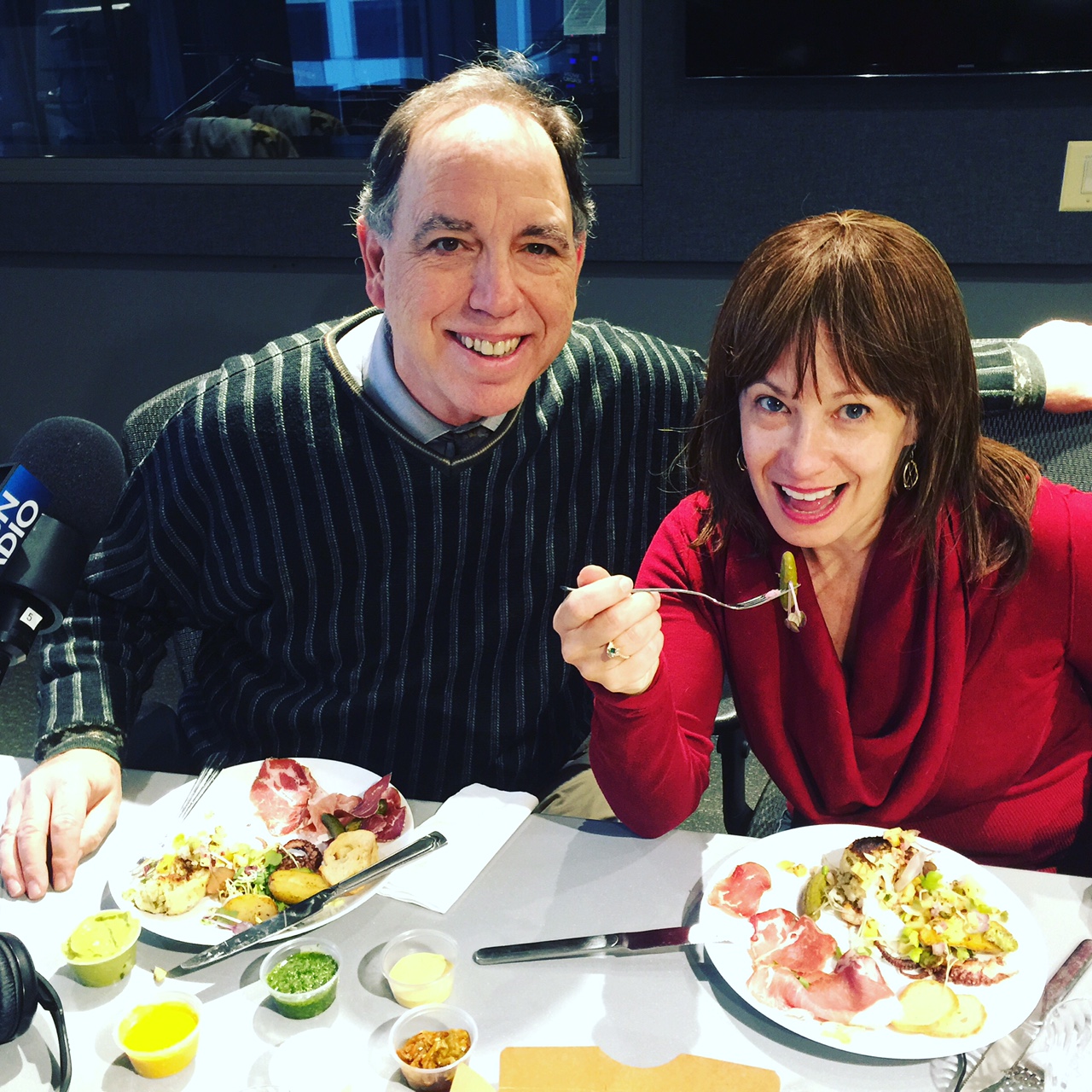 Here are two things that can make you laugh and rejoice this holiday season. First, click here or below to watch the funniest moment from The Dinner Party
. Guaranteed to make you smile! Second, check out the 245th Beethoven Bash orchestrated by George Lepauw on Wednesday, Dec. 16th. No one throw a party celebrating life and music like George! Don't miss it and Happy Holidays everyone. See all you beautiful people is 2016. 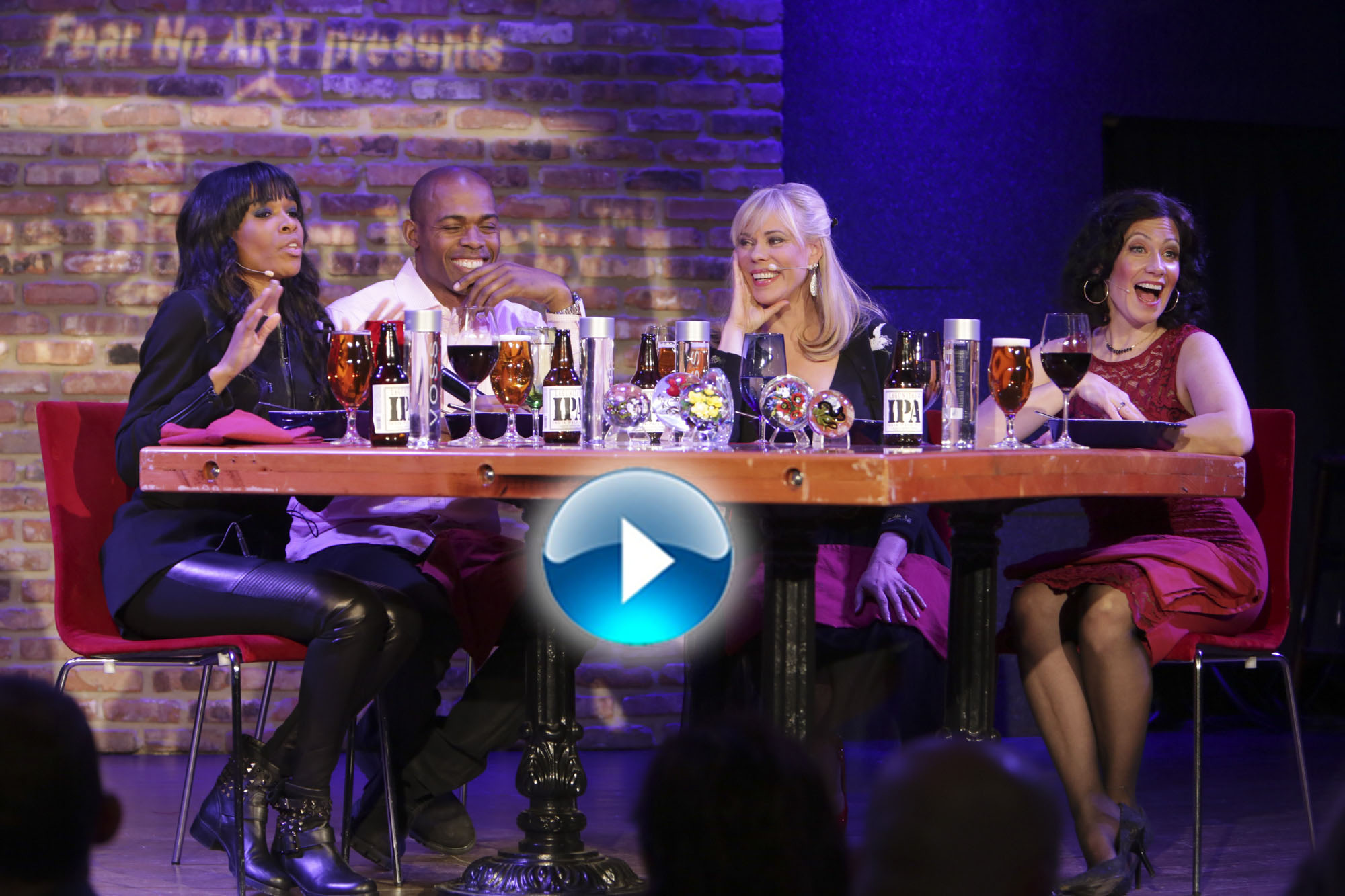 Posted by PIX INTERNATIONAL (pixintl) at 10:50 AM No comments: