WHAT:          To celebrate the recent release on Blu-ray and DVD of the comedy hit ANCHORMAN 2: THE LEGEND CONTINUES David Koechner will be throwing out the ceremonial first pitch AND leading the 7th inning stretch sing-along at the Chicago Cubs Game on April 10th.  Koechner who portrays news team sports anchor Champ Kind is well known for his “whammy!” catch phrase and will attempt to dazzle on the mound and in the booth in a rare double duty pitch and singing performance.
Actor, writer and producer David Koechner, an alumnus of Chicago’s Second City Theater, got his first break as a cast member on “Saturday Night Live” and since has become an instantly recognizable face appearing in more than 120 films and television shows. He is best known for his roles as Todd Packer on “The Office” and Champ Kind from the Anchorman films. Koechner will be performing his stand-up routine at Park West in Chicago on April 11th.  Visit davidkoechner.com for more details and tour dates.
ANCHORMAN 2: THE LEGEND CONTINUES is available now on Blu-ray Combo Pack and includes THREE versions of the film—the original Theatrical Version, the Unrated Version and, the Super-Sized R-Rated Version with 763 new jokes!

Posted by PIX INTERNATIONAL (pixintl) at 2:18 AM No comments: 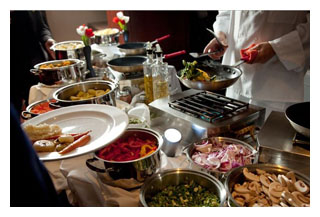 Maxwell's at the Club, located in the East Bank Club at 500 N. Kingsbury St. (telephone: 312-527-5800, ext. 301), will present its elegant annual Easter Brunch on Sunday, April 20 from 10 a.m. to 3 p.m. The extensive buffet, which is open to the public, will feature prime rib and roast turkey carving stations, an omelet bar, a waffle bar, assorted pastries and seasonal berries, as well as a variety of appetizers, salads and entrées.

The entire family will enjoy the festivities, which includes a special appearance by the Easter Bunny from 11 a.m. to 1 p.m. Because Maxwell's Easter Brunch is very popular, reservations are necessary.

Maxwell's Carving Station features Roast Beef Prime Rib with Au Jus and Horseradish, and Roast Turkey Breast with Cranberry Sauce. Luncheon-oriented entrées will include Braised Beef with Heirloom Polenta; Gnocchi with Asparagus and Wild Mushrooms; and assorted Seafood selections. The Pastry and Dessert Station will present a Seasonal Array of Fruits and Berries along with assorted Pastries, Breads and Desserts.

"The Easter Brunch at Maxwell's is always spectacular, and we're looking forward to greeting everyone for this special celebration," said Mike Romano, Food and Beverage Director for the East Bank Club.

Reservations are required for this very popular Easter Brunch. To make reservations, pp lease call (312) 527-5800, extension 301, or schedule your table online at http://eastbankclub.com/dining/maxwells-at-the-club/events/easter-brunch/
.

Posted by PIX INTERNATIONAL (pixintl) at 1:43 AM No comments:

Posted by PIX INTERNATIONAL (pixintl) at 1:24 AM No comments:

RICOH is running a campaign with CNN to giveaway the THETA, a new, revolutionary camera that captures a full 360 degree photos!